It’s good to be back

I haven’t posted an update on this blog since June. Wow. Time sure got away from me!

Here’s a short synopsis of what’s being going on on the farm:

• Completed our first semester of homeschooling. The curriculum we decided on was Classical Conversations, Saxon math and First Language Lessons. This was a HUGE decision for us. After pouring over and flip-flopping back and forth between different curriculum, I came to the conclusion that nothing will be perfect and they will learn no matter what. I will probably write more about all of this at a different time. 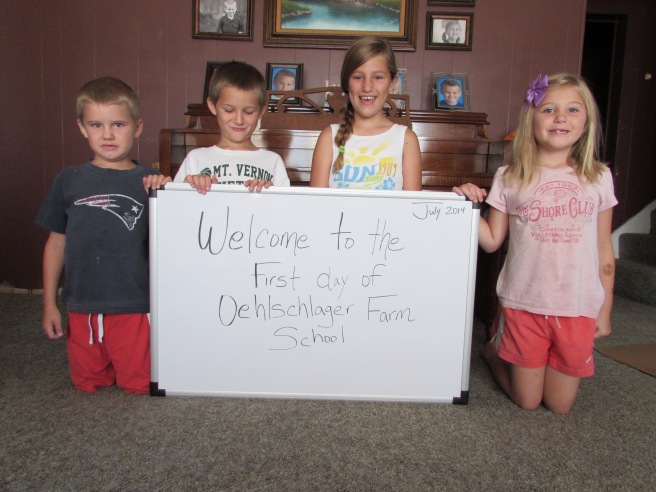 Yes, this was the best shot I captured of this milestone.

• Our lives were consumed with our first year of mighty-mite football. I had no idea that it was going to be as consuming as it was. ‘Twas fun, but was thankful it was over … until next season.

Rylan is #7 (like his favorite Mt’neer, his cousin, Payton!)

• Had three significant family health ordeals. My paternal grandmother died in July. One of my maternal uncles was diagnosed with and then died of ALS. One of my maternal aunts was diagnosed with and continues to fight a brutal form of cancer. These three things have had a monumental impact on our family life over the past several months. My grandma’s death was a first for my kids. Explaining about death and “where she is now even though we see her body” was hard. They knew her well and it was hard for them, which made it even harder on us. My uncle’s diagnosis and death was heartbreaking, but I was and am still marveled at the grace he showed through the entire ordeal. There was never a “woe is me” attitude. Never. There was only acceptance and strength and courage as he walked that scary road. I hope to never forget how he humbly accepted his fate. It was a big lesson for me. My aunt’s cancer diagnosis came at a terrible time. But really there’s never a good time for cancer. It stinks. It sucks (yes, I typed that … sorry!). When I read the statistics, it took my breath away. Unfair. Not possible. Bad dream. Thankfully, she has had lots of good news since the initial bad and I am confident she will beat this. My gut feeling is she will be fine. And that’s all I have to say about that …

Grandma Helen and me

• Harvested lots of produce, meat. By the end of garden season I had (including last year’s harvest) 95 quarts of beans and lots of tomatoes and I even canned chicken broth (that was an unexpected experience)! We butchered our pigs, harvested old layers and Matt shot the first deer to ever be harvested on Oehlschlager farm! This was also Rylan’s first year for youth deer season.

Matt with his mini hunter, Rylan.

• My baby brother visited in October! He is a corporal in the Marine Corps and is stationed in Japan. We had not seen him in a year almost to the date. Love that guy … 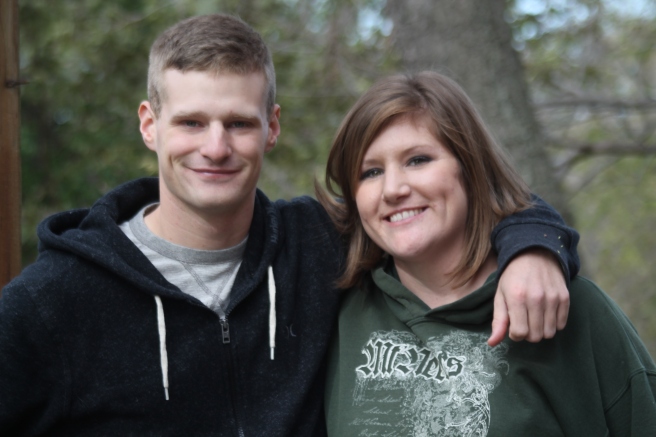 • My mom was elected Lawrence County Treasurer!!! Couldn’t be more proud of her. I don’t know if I would have the guts to step out of my comfort zone like she did. She not only started a completely new career but one that she had to be elected in to. Way to go, Mom!

• After Christmas we picked up our long-desired-for-puppy, Ari! She’s a giant pain in my neck (be careful what you wish for!), but she’s be a delightful and appropriate addition to our crazy life. In case you’re wondering, she’s a Pembroke Corgi.

I think that pretty much sums up the last six-plus months. Until next time!

Categories: Life on the farm

My name is Ginia Oehlschlager and I'm a small-town gal from Missouri. Join me as I document my crazy life on the farm with my husband and four kids. I'm always looking for frugal, simple ways to live the life God set before me. Where faith, family and fun come together on the farm.

My Home on the Farm

My Home on the Farm